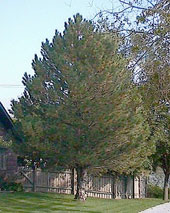 Yellowing and browning of needles in the fall is a normal occurrence on pine, spruce, cedar and juniper. The discolouration, which affects the older needles closer to the trunk, can begin in early August and continue until freeze up. Needle drop can occur in the fall or over the winter months. In the spring, a large amount of needles may be noticed on the ground underneath the plants.

Conifers do not keep their growth of needles on their branches while spruce keep up to seven years growth. Occasionally, plants will retain their needles for several years before dropping them. The amount of natural shedding can Fall Needle Drop on Eastern White Pine Photo from University of Nebraska-Lincoln Extension be greater if the trees or shrubs are placed under any stress such as drought, flooding, insect or mite attack. Needles that are dropped are not replaced; this is why evergreens are bare of needles in the centre of the plant near the trunk.

Other Causes of Browning

There are other reasons for discoloured needles to occur on trees and shrubs. Some of the more common causes are: